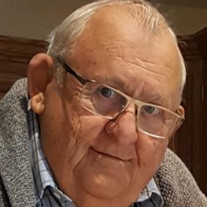 Harold Richard Barker, 81, of Odessa, Missouri passed away on Saturday, May 15, 2021 at St. Luke’s East Hospital in Lee’s Summit, MO. A visitation will be held from 6:00 p.m. to 8:00 p.m., Wednesday, May 19, 2021 at Ralph O. Jones Funeral Home, 306 S. 2nd Street, Odessa, MO, 64076, 816-633-5524. A funeral service will be held at 11:00 a.m., Thursday, May 20, 2021 at the funeral home. Interment will follow at the Greenton Cemetery in Odessa, MO. Memorials are suggested to Odessa Senior Center Building Board. Memories of Harold and condolences for his family may be left at www.LedfordFamilyFH.com or on our Facebook Page. Harold was born on September 8, 1939 to Horace and Helen (Schneider) Barker on the family farm, eight miles north of Odessa. In 1941, the family moved to Odessa, where he became a lifetime resident. Harold was a graduate of the Odessa High School class of 1957. Upon graduation, he went to work for the government in the Social Security Department. On April 25, 1959 Harold was united in marriage to Lois Roberts at the Methodist Church in Oak Grove, MO. In 1961, he went to work for the GM Leeds Plant, retiring in 1990. After retirement, Harold worked two additional jobs. The first being with the Odessa Post Office for eight years and the last being with Red Cross Pharmacy in Odessa for ten years. He fully retired at the age of 73. Harold was active in the Odessa community. He coached little league basketball, girls’ softball, and was a Cub Scout Master. Harold served as an Alderman and on the Senior Citizen Building Board. He was Chairman of the Community Betterment in 1985 and played an essential role in Odessa, by having the Odessa Community Building built. Harold was named Odessan of the year in 1985. In addition to his wife, Lois, of 62 years, survivors include a son, Scott Barker and partner, Mike Schreiman; a daughter, Stacy Heard and husband, James; two grandsons, Clayton and Cole Heard; all of Odessa, MO; and many relatives and friends. Harold was preceded in death by his parents, and a sister.

The family of Harold Richard Barker created this Life Tributes page to make it easy to share your memories.

Harold Richard Barker, 81, of Odessa, Missouri passed away on...