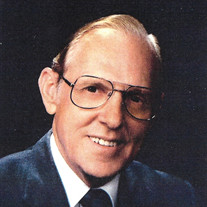 George Mason Hulver, 97, of Higginsville, passed away December 6, 2020 at Research Medical Center, Kansas City. Friends may call Thursday, December 10, 2020 from 3:00 until 5:00 pm at Walker-Nadler-Fuller Funeral Home, Lexington. There will be a private burial at Memorial Park Cemetery, Lexington. Memorials are suggested to Meyer Care Center Nursing Program or Macular Degeneration Research. Memories and condolences may be left at www.LedfordFamilyFH.com. Arrangements have been entrusted to Walker-Nadler-Fuller Funeral Home, 1720 South Street, Lexington, MO 64067, 660-259-2245. George was the son of J.E. and Alice (Cooke) Hulver. He was born in Buffalo, Missouri and was raised on a farm in Concordia, Missouri. He attended college in 1941 at Missouri State Teacher’s College. In 1942 he enlisted in the United States Army for three years and spent 25 months in the Southwest Pacific in 518 AAA Gun Battlion. He was stationed in New Caledonia, New Guinea and was involved in the invasion of Luzon, Phillipines. After World War, II, George returned to school at the University of Missouri and graduated in 1948. He then married Kay Oberg from North Dakota. They moved to Enid, Oklahoma and he eventually became the general manager of Cooperation Grain Dealeers, a state wide service organization of Oklahoma and the Texas panhandle. He was also president and CEO of Triangle Insurance. He was a member, past president and member of the year of the Exchange Cub. He was a member and past president of the Oklahoma Corporation Council, a director and on the executive board of the American Institute of Cooperatives, Washington DC, and a board member of Farmland Industries retirement program for local cooperatives throughout the midwest at Kansas City, Missouri. He worked closely with Oklahoma State University as committee representation in building cooperation. He twice received awards from Oklahoma State University for his leadership in cooperation and the grain industy of Oklahoma as well as other awards for his service. His wife Kay passed away in 1999, George then married Phyllis Kraus in 2000. She preceded him in death in 2015. Survivors include his daughters, Debra Burke and husband Dr. Dan Burke of Nixa, Missouri and Kari Long and husband Michael Long of Winona, Minnesota; grandchildren, Kyle Burke and wife Michele, Jennifer Miller and husband Ryan, Chris Burke, Kevin Burke and wife Kelsey, Sean Burke and wife Ashley, Katie Kottke and husband Kevin and Brent Long, six great grandchildren, and many extended family members. Goerge was preceded in death by his parents; his two wives; and his siblings, Issac, Edward, Ednabelle, and Edith.

The family of George Mason Hulver created this Life Tributes page to make it easy to share your memories.

Send flowers to the Hulver family.