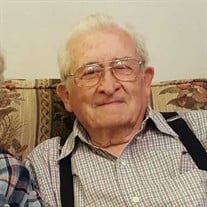 George Bell, 89, Lexington passed away on Saturday, March 9, 2019 at his residence. Funeral Services for George will be held on Wednesday, March 13, at 2:00 pm at the Walker Nadler Fuller Funeral Home. Visitation will be held on Wednesday also from 1:00 to 2:00 pm at the funeral home. Burial will be in Lexington Memory Gardens. Memorials may be made to the Sarah Cannon Cancer Center, or to Preferred Hospice. George Philip Bell was born on May 3, 1929 in St. Louis, MO. to Thomas Philip and Eula Opal Smith Bell. He was raised in Higginsville and graduated from Higginsville High School in 1947. In 1949 George married Patricia Darline Schaller of Corder. The reverend George Gray officiated. The couple moved to Lexington in 1949 and built their lifetime home in 1951 on Aull Lane. He was employed at Lake City Munitions plant from 1951 until 1985. Survivors include his wife, Patricia, of the home. There are three children, Larry Bell and wife, Ingrid, Excelsior Springs, Lonnie Bell and wife, Joyce, Wellington, and Linda Yount and husband, Daniel, Lexington. There are 7 grandchildren, Chad Bell, Mackenzie Todd, Kristy Wilson, Dustin Bell, Jennifer Neece, Breanna Cutter and Jason Bell. and 8 great grandchildren. Also surviving is a brother, Gilbert Bell and his wife, Joann, Columbia, MO. George was preceded in death by his parents and a brother, Gerald and a great grandson Holden Arby Todd.

The family of George Bell created this Life Tributes page to make it easy to share your memories.

Send flowers to the Bell family.