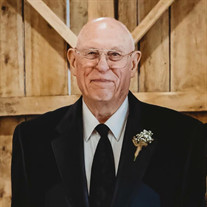 Fred Wayne Day, 83, of Odessa, Missouri, passed away on Tuesday, December 21, 2021, at Centerpoint Medical Center in Independence, MO. A visitation will be held from 5:00 p.m. to 7:00 p.m., on Friday, January 7, 2022, at Ralph O. Jones Funeral Home, 306 S. Second Street, Odessa, MO, 64076, 816-633-5524. A funeral service will be held at 11:00 a.m., on Saturday, January 8, 2022, at the First Baptist Church of Odessa, 100 State Hwy OO, Odessa, MO, 64076. Interment will follow at the Odessa Cemetery. Memorials are suggested to the family, in care of Eileen Corbit, for a charity to be chosen at a later date. Memories of Fred and condolences for his family may be left at www.LedfordFamilyFH.com or on our Facebook Page. Fred was born on March 4, 1938, to Benjamin Ragland Jr. and Isabelle Lizzetta (Schneider) Day in Odessa where he remained as a lifelong resident. He was a member of the Odessa First Baptist Church. He graduated from Odessa High School in 1957. On November 11, 1960, Fred was united in marriage to his high school sweetheart Cynthia (Snyder) in Odessa, MO. Fred was on active duty in the United States Army Reserve from Feb. 1962 until August 1962. He was honorably discharged July 31, 1967. Fred retired from General Motors as a security guard after 20 years of employment. Prior to that he worked at the Ford Assembly Plant and was elected as City Marshal with the Odessa Police Department. Fred served on the Odessa Fire & Rescue Protection District from Jan 1968 to Nov 2011. He held several officer positions including secretary/treasurer and Fire Chief. Fred was passionate about spending time with family and friends. He never met a stranger and embraced helping anyone he could with his huge heart. He enjoyed riding motorcycles, traveling, attending anything the Grandchildren were involved in and especially going to the lake. Fred is survived by two daughters, Eileen Corbit (Jerry) of Bates City, MO and Kathleen Finkemeier of Odessa, MO; a sister Oleatha Newland (Bill) of Oak Grove; two brothers, Orville Lee Day (Sharron) and Kenneth Day (Patty) both of Odessa, MO. Grandchildren Chad Barker (Rachel) of Blue Springs, Bryan Barker (Lorri) of Blue Springs, Courtney Adams (Josh) of Odessa, Clint Finkemeier (Chasity) of Eugene, MO, Kaitlyn Moreno (Zach) of Lone Jack and Collin Baumann of Odessa. He also leaves behind nine great grandchildren and many nieces, nephews, relatives and friends. Fred was preceded in death by his wife, parents and a grandson, William Cody Finkemeier.

The family of Fred Wayne Day created this Life Tributes page to make it easy to share your memories.

Fred Wayne Day, 83, of Odessa, Missouri, passed away on Tuesday,...

Send flowers to the Day family.