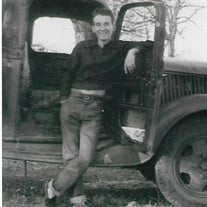 Forest Kenneth Russell, 90, of Kansas City, MO, formerly of Odessa, MO, passed away on Wednesday, March 24, 2021 at the Rosewood Health Center in Independence, Missouri. The family will host a private inurnment at the Missouri Veteran’s Cemetery. Arrangements have been entrusted to Ralph O. Jones Funeral Home, 306 S. 2nd Street, Odessa, MO, 64076, 816-633-5524. Memorials are suggested to the Alzheimer’s Association. Memories of Forest and condolences for his family may be left at www.LedfordFamilyFH.com or on our Facebook Page. Forest was born on November 3, 1930 in Pittsburg, KS to Howard Kenneth and Amanda Isabelle (Endicott) Russell. After graduating from Pittsburg High School in Pittsburg, MO, he enlisted in the United States Marine Corps on March 14, 1949, serving until honorably discharged on March 13, 1952. During that time, Sergeant Forest Russell served in the Asiatic Pacific during the Korean War, earning the Rifle Marksman, Certificate of Service, and Korean Service Ribbon. He owned and operated the Golden Glaze Donut Shop and restaurant with locations in Odessa, Lexington, and Higginsville, MO. Forest later retired from his second career, after 10 years as a security guard. He was united in marriage to Rita Fay (Lampton) in July of 1977 in Higginsville, MO. In addition to visiting with family and friends, Forest enjoyed fishing, traveling, and going to garage sales. In addition to his wife, Rita of 43 years, survivors include five children, Terry Trieu and husband Dung of Falkville, Alabama, Mike Russell and wife Susan of Overton, TX, James Russell of Blue Springs MO, John Russell and wife Lisa of Tightwad, MO, and David Russell of Odessa, MO; one stepson, Jeff Thaller of Higginsville, MO; fifteen grandchildren; twenty great grandchildren; and many relatives and friends. Forest was preceded in death by his parents; a son, Bill Russell; and a sister, Sharon McDaniel.

Forest Kenneth Russell, 90, of Kansas City, MO, formerly of Odessa, MO, passed away on Wednesday, March 24, 2021 at the Rosewood Health Center in Independence, Missouri. The family will host a private inurnment at the Missouri Veteran&#8217;s... View Obituary & Service Information

The family of Forest Kenneth Russell created this Life Tributes page to make it easy to share your memories.

Send flowers to the Russell family.