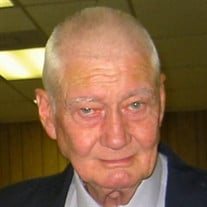 Ernest “Ernie” Louis Krahenbuhl Jr., age 88, of Odessa, MO. passed away October 31, 2020 at the St. Luke’s Hospice House in Kansas City, MO. A private Graveside Service will be held at a later date. Inurnment will be in Greeton Cemetery, Odessa, MO. Memorials are suggested to the St. Luke's Hospice House and may be left in care of the funeral home. Arrangements have been entrusted to Ralph O. Jones Funeral Home, 306 S. 2nd Street, Odessa, MO, 64076, 816-633-5524. Memories of Ernie and condolences for his family may be left on our website www.LedfordFamilyFH.com or on our Facebook Page. He was a loving husband, father, grandfather and great-grandfather, and will be dearly missed. Ernie was born January 30, 1932 in Oak Grove, MO to the late Ernest and Bertha (Drake) Krahenbuhl. He was a 1949 graduate of Oak Grove High School. He was a long time resident of Independence prior to moving to Odessa before retirement. Ernie also maintained a full time residence in Warsaw MO as well. He received his Master and Bachelor’s degrees from Central Missouri State College (now known as University of Central Missouri) in 1953. Upon completion of his college education he was drafted into the Army and served his country during the Korean War conflict, obtaining the rank of Corporal. After returning he was attached to the National Guard until 1961. It was during his military Service that he began a long career in electronic communications. After his military service, he began working for Radio Lab in Kansas City and a few years later he became a founding member of Midland International Radio in 1963. Later he became a partner with Royce Electronics and Electra Corporation. Ernie Retired from Midland Radio in January 1998. He married Willa “Billie” Sue Gammon on December 14th, 1955 in Kansas City. Ernie and Billie raised four sons; Steven (Columbia, MO), Thomas (Holden, MO), Timothy (Centerview, MO) and James (Odessa, MO). He was preceded in death by his siblings: Dorma Eubank and Bessie Morrow. He is survived by his sons: Steven (Denise), Tom (Shannon), Tim, and James (Jennifer). 6-Grandchildren, 5-Great-Grandchildren.

The family of Ernest Louis Krahenbuhl Jr. created this Life Tributes page to make it easy to share your memories.

Send flowers to the Krahenbuhl family.