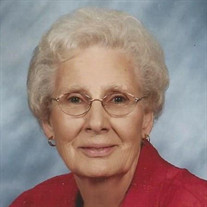 Emma E. (Tye) Hobbs, 96, of Odessa, MO, went home to Jesus on July 28, 2021. A visitation will be held from 12:00 p.m. to 1:00 p.m., on Monday, August 2, 2021, at the First Baptist Church of Odessa, 100 State Hwy OO, Odessa, MO 64067. A funeral service will follow at 1:00 p.m. at the church. Facemasks are to be worn per the family’s request. Interment will follow at Mt. Tabor Cemetery in Odessa, MO. Memorials are suggested to the First Baptist Church in Odessa. Memories of Emma and condolences for her family may be left at www.LedfordFamilyFH.com or on our Facebook page. Arrangements have been entrusted to Ralph O. Jones Funeral Home, 306 S. 2nd Street, Odessa, MO 64076, 816-633-5524. Emma was born to “Pal” and “Lona” Tye on February 14, 1925. She graduated from Farmers High School in 1942. Emma was united in marriage to Loren Horace Hobbs on January 4, 1947, and remained in Odessa where they raised their sons Mike and Doug. She worked as an inspector for AT&T, retiring in 1985. Emma was also a faithful member and volunteer at the First Baptist Church for over 70 years. In addition to spending time with family and friends, she enjoyed traveling, going to the dinner theatre, playing cards, and gardening. She was preceded in death by her husband Loren; son Doug and his wife Patti; a sister, Louie Jane “Sis” Laun; and four brothers, Doyle “Jack” Tye, Joel “Joe” Tye, John “Leroy” Tye, and James “Jim” Tye. Emma is survived by her son Mike (Jane) Hobbs; grandchildren Elizabeth (Devin) Dennis, Stacy (Mike) Dixon, Michael (Karen) Hobbs, Kevin (Sarra) Hobbs, Sara (Josh) Harrell, and Matt (Dana) Hobbs; 13 great-grandchildren; sister Oza “Sue” Miller. Memorial contributions may be made to the First Baptist Church of Odessa. The family would also like to extend sincere gratitude to the caregivers at Meyer Care and to all the family and friends who prayed and cared for Emma

The family of Emma Elizabeth (Tye) Hobbs created this Life Tributes page to make it easy to share your memories.