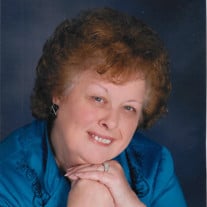 Elvera Marie (Adams) Rider, 80 of Odessa, Missouri passed away on Monday, October 7, 2019 at Centerpoint Medical Center in Independence, MO. A visitation will be held from 6:00 p.m. to 8:00 p.m. Thursday, October 10, 2019 at the Ralph O. Jones Funeral Home, 306 S. 2nd St., Odessa, MO, 64076, 816-633-5524. A funeral service will be held at 1:00 p.m. Friday, October 11, 2019 at the First Baptist Church, 100 W. OO Hwy., Odessa, MO, 64076. Burial will be in the Greenton Cemetery. Memorials are suggested to the First Baptist Church or to Crossroads Hospice. Memories of Elvera and condolences for her family may be left at www.LedfordFamilyFH.com or on our Facebook page. Elvera was born on March 21, 1939 in Odessa, MO to Herbert Stone and Lena Bell (Colvin) Adams. She graduated in 1957 from Odessa High School in Odessa, MO. On June 14, 1957 she married Paul Calvin Rider in Elm, MO. He preceded her in death on March 1, 2003. Elvera worked for 10 years as a cook at the Odessa High School Cafeteria and was a homemaker. She was a member of the First Baptist Church. In addition to spending time with friends and family, Elvera enjoyed camping and cooking. Survivors include three children, Mark Rider and wife Donna of Odessa, MO, Steve Rider and wife Lingling Wu of Independence, MO, and Linda Wijeweera and husband Yasntha of Blue Springs, MO; three grandchildren, Wendell Train and wife Bree of Lee’s Summit, MO, Andrew Rider of Overland Park, KS, and Alec Rider of Odessa, MO; three great grandchildren, Jackson, Mason, and Cohen Train; and two brother in laws, George Rider and wife Irma of Odessa, MO and Bob Rider and wife Della of Townsend, MT. In additions to her parents and husband, Elvera was preceded in death by a sister Helen Day and a brother Forrest Herbert Adams.

The family of Elvera Marie Rider created this Life Tributes page to make it easy to share your memories.

Send flowers to the Rider family.