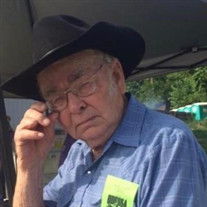 Elver Perry Athon, 92, of Mayview, Missouri passed away on December 4, 2020 at St. Mary’s Medical Center in Blue Springs, MO. A visitation will be held from 1:00 p.m. to 2:00 p.m., Thursday, December 10, 2020 at the Odessa Restoration Branch, 6783 MO-131, Odessa, MO, 64076. Masks are required. A funeral service will follow at 2:00 p.m. at the church. Interment with Military Honors will follow at the Marvin Chapel Cemetery in Mayview, MO. Memorials are suggested to the Marvin Chapel Cemetery Association. Arrangements have been entrusted to Ralph O. Jones Funeral Home, 306 S. 2nd St., Odessa, MO, 64076, 816-633-5524. Memories of Elver and condolences for his family may be left at www.LedfordFamilyFH.com or on our Facebook Page. Elver was born on June 27, 1928 in Sullivan County, MO to Leland and Jenny (Zigler) Athon. He enlisted in the United States Army on January 3, 1951. On January 16, 1954 Elver was united in marriage to Dorothy Mae Bolander. She preceded him in death. After living in Independence for 22 years, Dorothy and Elver moved to their family farm in Mayview and made that their home for the last 43 years. He owned and operated Best Wall Waterproofing for over 40 years. Elver was a member of the Odessa Restoration Branch. In addition to spending time with family and friends, he enjoyed fishing, camping, hunting, and playing baseball with his grandchildren. Survivors include a son, Randy Athon of Odessa, MO; a daughter, Sandra Buchan and husband, Dale of Oak Grove, MO; a son in law, Marvin Benwell of Holden, MO; five grandchildren; eleven great grandchildren; and a great great grandchild. In addition to his parents and wife, Elver was preceded in death by a daughter, Rene Benwell.

The family of Elver Perry Athon created this Life Tributes page to make it easy to share your memories.

Elver Perry Athon, 92, of Mayview, Missouri passed away on December...

Send flowers to the Athon family.