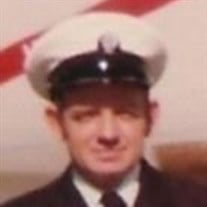 Elton Everette Miller, 78 of Odessa, Missouri passed away on Sunday, September 20, 2020 at Centerpoint Medical Center in Independence, MO. A graveside service with military rites will be held at 2:00 p.m., Thursday, September 24, 2020 at the Missouri State Veterans Cemetery, 20109 Bus. Hwy. 13, Higginsville, MO, 64037. In lieu of flowers, memorials are suggested to the family in care of Mary Miller. Memories of Elton and condolences for his family may be left at www.LedfordFamilyFH.com or on our Facebook Page. Arrangements have been entrusted to the Ralph O. Jones Funeral Home, 306 S. 2nd St., Odessa, MO, 64076, 816-633-5524. Elton was born on January 30, 1942 in Levasy, MO to George and Mildred (Sumpter) Miller. Elton served 20 years in the United States Navy and retired as an E-6. During his time in the Navy he earned three Good Conduct Medals, Meritorious Unit Commendation and Navy Unit Commendation, and Armed Forces Expeditionary Medals. After retiring from the Navy, Elton started trucking as an over the road truck driver. He drove for 20 plus years for various companies before retiring for the second time. Elton was a member of the VFW. On August 23, 1961 he married Mary (Morris) Miller in Higginsville, MO. In addition to spending time with family and friends, Elton enjoyed watching football. Survivors include Elton’s wife Mary Miller of Odessa, MO; two sons, Bruce Miller (Tammy) of Higginsville, MO and Dale Miller (Carlotta) of Odessa, MO; seven grandchildren, Ashley, Jessica, Travis, Kristen, Brock, Victoria, and Reagan; two great-grandchildren, Nicole and Liam; a sister, Wanda Carroll of Higginsville, MO; and many nieces and nephews. In addition to his parents, Elton was preceded in death by two brothers, Roy and Jimmy Miller; and a sister, Darlene Morris.

Elton Everette Miller, 78 of Odessa, Missouri passed away on Sunday, September 20, 2020 at Centerpoint Medical Center in Independence, MO. A graveside service with military rites will be held at 2:00 p.m., Thursday, September 24, 2020 at the... View Obituary & Service Information

The family of Elton Everette Miller created this Life Tributes page to make it easy to share your memories.

Elton Everette Miller, 78 of Odessa, Missouri passed away on...