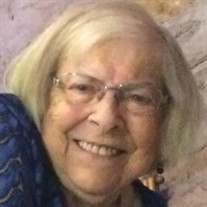 Elizabeth Anne (Hifner) Haney, 90, of Odessa, Missouri passed away on Wednesday, October 14, 2020 at her home. A Visitation will be held from 10:00 a.m. to 11:00 a.m. on Saturday, October 17, 2020 at the First Baptist Church of Lexington, 525 S. Business Hwy 13, Lexington, MO, 64076. A funeral service will follow at 11:00 a.m. at the Church. For safety purposes, the family is requesting masks to be worn by all guests. The service will be streamed through Facebook Live from the church's Facebook Book. Burial will be in the Salem Cemetery in Independence, MO. In lieu of flowers, memorials are suggested to the First Baptist Church of Lexington Youth Programs. Arrangements have been entrusted to Ralph O. Jones Funeral Home, 306 S. 2nd Street, Odessa, MO, 64076, 816-633-5524. Memories of Elizabeth and condolences for her family may be left at www.LedfordFamilyFH.com or on our Facebook Page. Elizabeth was born on January 4, 1930 in Independence, MO to Henry and Emma Annette (Pryor) Hifner. After graduating from William Chrisman High School in 1947, she began her teaching career at Pleasant Grove Elementary School in Independence and attended Central Missouri State University. On August 20 ,1950 Elizabeth was united in marriage to Carl Ray Haney of Coleman, TX in Independence, MO. Enduring a wartime separation, only 6 months into their marriage for Carl’s service in the Korean War from 1951-1952, they were married for 62 years until his passing on January 29, 2013. Elizabeth taught at Ft. Osage, Strasburg, Oak Grove, Mayview, and Odessa Elementary schools for more than 40 years while completing her BSE in 1974 and her MSE in 1977 from Central Missouri State University and later receiving the Crystal Apple Award. She was an active member of the First Baptist Church of Lexington, Optimist Club, Red Hats, Delta Kappa Gamma, Daughters of the American Revolution, and Girl’s Auxiliary. In addition to spending time with family and friends, Elizabeth enjoyed being involved in disaster relief, foster care, International Student Outreach, clowning and tutoring. Survivors include, three sons, Jim Haney (Donna), Jerry Haney (Debbie) and Terry Haney (Konnie) all of Odessa, MO; nine grandchildren, Heather McGee, Rachel Aiello, Chrystal Simpson, Joshua Haney, Kristina Haney, Whitney Brigandi, Karmen Vaughn, Alexandra Echelmeier, and Austin Echelmeier; nine great grandchildren; three great great children; and many relatives and friends. In addition to her parents and husband, Elizabeth was preceded in death by a grandson, Andy Warren; and a sister, Mary Louise Beyer.

The family of Elizabeth Anne Haney created this Life Tributes page to make it easy to share your memories.

Send flowers to the Haney family.