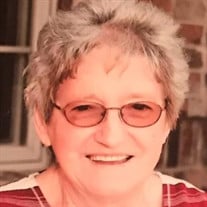 Eleanor “Nute” Ann (Hobbs) Specker, age 80, of Odessa, MO passed away on Tuesday, May 25, 2021 at the New Haven Living Facility in Odessa, MO. A private graveside inurnment will be held at the Odessa Cemetery in Odessa, Missouri. Memorials are suggested to Alzheimer’s Association and may be left in care of Ralph O. Jones Funeral Home, 306 S. 2nd Street, Odessa, MO, 64076, 816-633-5524. Memories of Nute and condolences for her family may be left at www.LedfordFamilyFh.com or on our Facebook Page. Nute was born on January 21, 1941, in Centerview, MO to George Allen and Cleo Ann (Peal) Hobbs. She was a graduate from Odessa High School. On December 17, 1958 Nute was united in marriage to Robert Allen Specker in Odessa, MO. He preceded her in death. She worked at several local businesses including cooking at the Odessa Senior Center, cleaning for the Bank of Odessa, reading water meters, and selling Avon for many years. Nute was a Christian by faith. She was very involved with her children’s activities in their younger years and volunteered as a Cub Scout leader. In addition to spending time with family and friends, she enjoyed cooking, gardening, animal watching, and hosting large family get togethers. Saturday and Sunday mornings were always spent drinking coffee with her family on the porch. Nute is survived by four children, Tammy Watson and husband Greg of Lexington, MO, daughter Judy Fisher and husband Darryl of Bates City, MO, daughter Lisa Bailey and husband Steve of Odessa, MO, daughter Julie Tully and husband Charles of Oak Grove, MO, a son Bobby Specker and wife Judy of Odessa, MO; a sister Sharon Day and husband Orville Lee of Odessa, MO; many grandchildren; many many great grandchildren; and a host of nieces, nephews, family, and friends. In addition to her parents and husband, Eleanor was preceded in death by a son David Allen Specker; three sisters, Frances Halsey, Norma Gadd, and Shirley McNeece; and three great-grandchildren in infancy, Analynne Arbogast, Ryan Fisher and Macie Hawkins. Honorary urn bearers will be Nute’s granddaughters.

Eleanor &#8220;Nute&#8221; Ann (Hobbs) Specker, age 80, of Odessa, MO passed away on Tuesday, May 25, 2021 at the New Haven Living Facility in Odessa, MO. A private graveside inurnment will be held at the Odessa Cemetery in Odessa, Missouri.... View Obituary & Service Information

The family of Eleanor "Nute" Ann Specker created this Life Tributes page to make it easy to share your memories.

Send flowers to the Specker family.