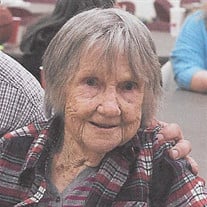 Edith Juanita (Cole) Clark, 97, of Oak Grove, MO formerly of Odessa, MO passed away on Friday, January 31, 2020 at the Oak Grove Nursing and Rehab. A visitation will be held from 5:00 p.m. to 7:00 p.m., Tuesday, February 4, 2020 at the Ralph O. Jones Funeral Home, 306 S. 2nd St., Odessa, MO, 64076, 816-633-5524. A graveside service will be held at 11:00 a.m., Wednesday, February 5, 2020 at the Odessa Cemetery in Odessa, MO. Memorials are suggested to the St. Jude Children’s Research Hospital. Memories of Edith and condolences for her family may be left at www.LedfordFamilyFH.com. Edith was born on September 2, 1922 in Independence, MO to Theodore A. and Edith A. (Cline) Cole. She married Floyd N. Clark, Sr. on February 20, 1940. He preceded her in death in 1991. She was a homemaker, taking care of her family. Edith was a member of the Odessa Restoration Branch. In addition to spending time with family and friends, Edith enjoyed gardening, sewing and animals. Survivors include five children, Lloyd Clark of Kansas City, MO, Ruth Ann Gittinger of Oak Grove, MO, David Clark and wife Ann of Oak Grove, MO, Deborah Hufford and husband Terry of Oak Grove, MO and John Clark and wife Sarah of Clinton, MO; 29 grandchildren; a host of great grandchildren and great great grandchildren; and many nieces and nephews. In addition to her parents and husband, Edith was preceded in death by two children, Bonnie Hamilton and Floyd Clark, Jr.; two brothers, Ted and George Cole; and two sisters, Louella Hamilton and Leona Cole.

The family of Edith Juanita Clark created this Life Tributes page to make it easy to share your memories.

Send flowers to the Clark family.