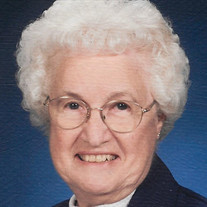 Earlene McLaughlin, 1930-2019. Nearly a century. In 1930, the Great Depression had begun. The Star Spangled Banner was officially named our National Anthem. The radio was becoming more popular along with swing jazz. Indoor toilets were in nearly half of all homes. TV was yet to be invented. What's a computer? This last, according to Earlene, was the worst invention of the 20th Century. Earlene was born in the front room of her parent's home in Norborne, Missouri. Francis and Christine (Bruemmer) Link had two other daughters, Charlotte Albus (deceased) of Carrollton, MO, and Veneta Hazelwood of Mesa, AZ. All three sisters graduated from Norborne High School where Earlene was Drum Major in the band - flaming batons and all. That's also where she met Harold (Mac) McLaughlin (deceased) who would become her lifemate. Earlene went on to the Alladin School of Cosmetology in Kansas City but never practiced her craft except on family and many friends. She maintained her cosmetology license all her life. Mac and Earlene married in 1949 and lived in Norborne and Richmond before settling in Lexington in 1953. Together, they built a family and a house, accumulated rental property to become landlords (Earlene was the financial wizard), and were very active community members. They shared a love of bowling and antique hunting. Earlene belonged to as many as three bowling leagues at once, was often the secretary (that love of numbers, again), was a member of the Women's Bowling Association, and went to Tournaments all over the United States. She was a better bowler than her husband (enough said). Their collection of hand-painted China by Koch is probably the most extensive anywhere. The display of these and other treasures collected over 49 years made a warm, inviting, colorful home. There are probably more than a few men in the area who remember Cub Scout Den Mother, Mrs. Mac. She was the one who never let you get away with anything. Many will remember, some with envy, how graceful Mac and Earlene were when dancing together - as long as it was a foxtrot. Earlene preferred not to remember foray's into The Twist, feeling that certain family videos should be destroyed. Earlene was a member of Immaculate Conception Catholic Church and Knights of Columbus Auxiliary groups, taking an active part in everything from cleaning church and making food for events and funeral repasts to helping establish CCD classes in the parish and serving, at one time or another, in every office of the groups. Rather late in life, she took up quilting. And spent the next 40 years producing over 200 items that she shared with family, friends, and many charities. Her work is amazing and enviable for precise piece -work and tiny, even stitching. These treasures will be enjoyed by many generations to come. Earlene and Mac spent 24 years of vacation on beautiful Waikiki. She always said those weeks were the only time her husband could relax from work. She spent the time embroidering and quilting a masterpiece that now belongs to her youngest son. Earlene lost her eldest son, Patrick, to cancer in 2002. Her surviving dynasty include: daughter Marsha McLaughlin of Joshua, TX; son Michael (Debra) of Bates City, MO; son Donald (Cheryl) of Lee's Summit, MO; daughter-in-law Carol McLaughlin of Montrose, MO; 10 grandchildren* and 13 (and counting!) great-grandchildren**. A rosary will be recited at 6 p.m., Wednesday, October 30, 2019, at Walker-Nadler-Fuller Funeral Home, 1720 South St., Lexington, MO, 64067, 660-259-2245. Visitation will follow from 6:30 p.m. to 8 p.m in the funeral home. Mass of Christian Burial will be held at 10:00 a.m. Thursday, October 31, 2019, at Immaculate Conception Catholic Church, 107 N. 18th St., Lexington, MO. Interment will follow in Lexington Memory Gardens. Lunch will then be provided for a reunion of friends and family. Memorials are suggested to 'Immaculate Conception Church Cemetery' (note: this is Old Catholic Cemetery) delivered or mailed to the Church or to the Fisher Center for Alzheimer's Research Foundation, online at https://www.alzinfo.org/donate. * Guy, Paul, Peter, Joseph, Sean, Ryan, Brandi, Ashley, Matthew, Mark ** Harper, Beckham, Pierce, Jack, Gillian, Houston, Colin, Abbie, Lillie, Samantha, Alice, Ayden, Elizabeth

Earlene McLaughlin, 1930-2019. Nearly a century. In 1930, the Great Depression had begun. The Star Spangled Banner was officially named our National Anthem. The radio was becoming more popular along with swing jazz. Indoor toilets were in... View Obituary & Service Information

The family of Earlene McLaughlin created this Life Tributes page to make it easy to share your memories.

Send flowers to the McLaughlin family.