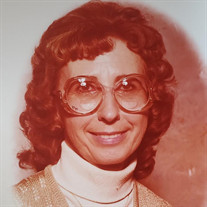 Donna Mae Darlene (Miller) Bailey, 89, of Odessa, Missouri went home to be with her heavenly father and reunited with her loved ones on Sunday, November 14, 2021, at St. Luke’s Hospice House in Kansas City, Missouri. Visitation will be held from 10:00 a.m. to 11:00 a.m. on Saturday, November 20, 2021, at New Horizon Presbyterian Church, 4266 MO-131, Odessa, MO, 64067. A funeral service will begin at 11:00 a.m. at the church. Interment will follow at Odessa Cemetery, Odessa, MO. Memorials are suggested to New Horizon Presbyterian Church, Odessa, MO or St. Luke’s Hospice House, Kansas City, MO. Memories of Donna and condolences for her family may be left at www.LedfordFamilyFH.com or on our Facebook Page. Arrangements have been entrusted to Ralph O. Jones Funeral Home, 306 S. 2nd Street, Odessa, MO, 64076, 816-633-5524. Donna was born September 6, 1932, to Frank A. and Mable (Johnson) Miller in Hawkeye, IA. She was united in marriage to Charley Ray Bailey on June 7, 1948, in Fayette, IA. Donna and Charley owned and operated Bailey’s Lot of Happy Homes Trailer Sales in Springfield and Odessa. She worked for Action Products for 27 years, retiring in 2008. After closing the family business, Donna and Charley traveled the United States, with their family, until Charley’s passing on November 17, 1979. Donna was a member and past president of BPW (Business and Professional Women’s Foundation) and was instrumental in developing the Rose Garden now known as Railroad Park in Odessa. Donna was a member of New Horizon Presbyterian Church in Odessa since 1962. When the church was renamed, Donna’s submission for the new name was chosen. She also served as a Mariner of the Presbyterian Church and served as both a Sunday School and Bible School Teacher. Donna was a caring person who will be missed greatly, when her mother-in-law passed away, she helped raise their three children as her own. In addition to spending time with her family and friends, Donna enjoyed antiquing, traveling, and was a collector of many things. Survivors include four children, Russell Bailey (Becky) of Slaton, TX; Roxanne Lentz (Lindy) of Sumner, MO; Kandance Luther (Jim) of Odessa, MO, and David Bailey of Odessa, MO; 16 grandchildren, Teressa, Charity, Christy, Amy, Ross, Amanda, Chad, Will, Monica, Randi Marie, Gypsy, Stacey, Bo, Stevie, Frank, and Ashly; 26 great grandchildren; 13 great-great grandchildren; and many nieces and nephews. In addition to her parents and husband, Donna was preceded in death by two sisters, Mable Mary Miller and Arlene Stufflebeam; three brothers, Lyle Miller, Dick Miller, and Jim Miller; and many nieces, nephews, relatives and friends.

Donna Mae Darlene (Miller) Bailey, 89, of Odessa, Missouri went home to be with her heavenly father and reunited with her loved ones on Sunday, November 14, 2021, at St. Luke&#8217;s Hospice House in Kansas City, Missouri. Visitation will... View Obituary & Service Information

The family of Donna Mae Darlene Bailey created this Life Tributes page to make it easy to share your memories.

Send flowers to the Bailey family.