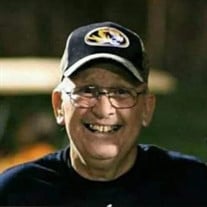 A visitation will be held from 1:00 p.m. to 2:00 p.m. on Monday, January 3, 2022, at Walker-Nadler-Fuller Funeral Home, Lexington, MO. Funeral services will be held at 2:00 p.m. following the visitation at the funeral home. Interment will follow at Wellington Cemetery, Wellington, MO. Memorials are suggested to the family in care of Cindy Reynolds. Memories of Donald and condolences for her family may be left at www.LedfordFamilyFH.com or on our Facebook Page. Arrangements have been entrusted to Walker-Nadler-Fuller Funeral Home, 1720 South Street, Lexington, MO, 64067.

Donald was born on February 15, 1943, to Elmer and Lena (Rice) Reynolds. Donald worked for over 20 years at Goldblatt Tool Company. He continued his work career working construction for various companies. Donald was united in marriage to Cindy Ray on August 28, 2004, in Wellington, MO. Donald will be remembered for enjoying time with family and friends as well as his love of woodworking.

Donald is preceded in death by his first wife, Patricia Reynolds in 2002; his parents; and two brothers, Robert Reynolds and Roy Reynolds.


To order memorial trees or send flowers to the family in memory of Donald Ray Reynolds, please visit our flower store.