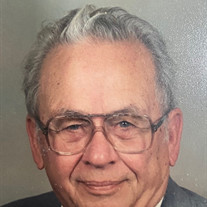 Donald Wayne Mudd, 93, passed away February 10, 2021 in the home that he built in the 50’s in Lexington.  There will be a public visitation on Monday, February 15, 2021 from 10:00 am until 11:00 am at Walker-Nadler-Fuller Funeral Home.  Masks will be required and no family will be present.  There will be a private family service.  Burial will be in Machpelah Cemetery, where he worked when he was young, helping his father and grandfather hand dig graves.  In lieu of flowers, memorials may be made to the Darrick K. Homfeld Memorial Scholarship Fund. Arrangements have been entrusted to the Walker-Nadler-Fuller Funeral Home, 1720 South Street, Lexington, MO  64067, 660-259-2245.  Memories and condolences may be left at www.LedfordFamilyFH.com.  Donald was born December 17, 1927 in Lexington to William Earl and Martha Katherine (Paris) Mudd.  He graduated from Lexington High School in 1946.  Donald enlisted in the United States Army and served in Korea.  On March 16, 1951 he married Marjorie J. Collobert in Lexington.  She preceded him in death in 2001.  He retired in 1987, after 30 plus years from the Missouri State Employment Service.  Donald was a member of the United Methodist Church, Elks Lodge 479 and Turners Club.  He was a past Elk of the Year and leader for Boy Scout Troop 318 and Cub Scout Pack 440.  He enjoyed fishing, hunting, going to local auctions (#66 at Adkins) and Trade Days in Canton, Texas. Survivors include, his children, Kathy Homfeld of Lexington, Richard Mudd (Nancy) of Guthrie, Oklahoma and Patty Sollars (Bob) of Richmond; grandchildren, Scott Homfeld (Sara), Leah Homfeld, Rachel Mudd Garrett (Chris), Philip Mudd (Sarah), Nathan Sollars, Sam Sollars and Michael Sollars (Adeane); and great grandchildren, Cole Homfeld, Cody Homfeld, Amelia Garrett, Alex Garrett, Katie Mudd, Rick Mudd and Theodore Sollars.  He was preceded in death by his parents; his wife; brother, Billy P. Mudd and grandson, Darrick K. Homfeld. Pall Bearers:  Philip Mudd, Nathan Sollars, Sam Sollars, Michael Sollars, Cole Homfeld and Cody Homfeld. Honorary Pall Bearers:  Scott Homfeld, Sam Adams, Wednesday night card group and his auction buddies.

The family of Donald Wayne Mudd created this Life Tributes page to make it easy to share your memories.

Send flowers to the Mudd family.