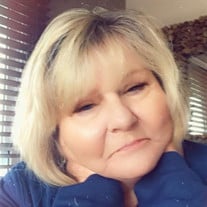 Diana Lynn (Martin) Danner, 66, of Independence, Missouri passed away on Wednesday, April 10, 2019 at North Kansas City Hospital in Kansas City, Missouri. Visitation will be held from 12:00 p.m. to 2:00 p.m., Monday, April 15, 2019 at the Ralph O. Jones Funeral Home, 306 S. 2nd St., Odessa, MO, 64076, 816-633-5524. Funeral services will be held at 2:00 p.m., Monday, April 15, 2019 at the funeral home. Burial will be in the Greenton Cemetery. Memorials are suggested to Journey Church, 1021 Brown St., Liberty, MO, 64068. Memories of Diana and condolences for her family may be left at www.ralphojones.com or on our Facebook Page. Diana was born on July 16, 1952 in Atchison, Kansas to Kenneth Carman and Helen Irene (Mount) Martin. She was united in marriage to Denver Danner on February 16, 1996 in Harrison, Arkansas. Diana retired in 2016 from Linda’s Original Hair Works in Parkville, MO where she was a Barber. Diana had worked for many years in the Northland and Parkville area. She attended Journey Church in Liberty, MO. In addition to spending time with her family and friends, she loved shopping and was an avid painter. Diana is survived by her husband Denver Danner of Independence, MO; three children, Kevin Martin and wife Dara of Excelsior Springs, MO, Sandy Danner of Napoleon, MO and Les Danner and wife Joanna of Odessa, MO; seven grandchildren and 4 great-grandchildren; a brother Kenneth Martin and wife Sharon of Blue Springs, MO; and many nieces and nephews. In addition to her parents, Diana was preceded in death by a brother, Larry Martin.

The family of Diana Lynn (Martin) Danner created this Life Tributes page to make it easy to share your memories.

Send flowers to the Danner family.