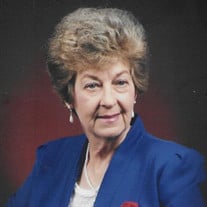 Davijean “Puddin” (Filler) Barker, 86, Odessa, Mo, died, Saturday, October 3, 2020 at Oak Grove Nursing home, Oak Grove, Mo. A private family service will be held on Thursday, October 8, 2020 at the Ralph O. Jones Funeral Home, 306 S. 2nd St., Odessa, Mo, 64076, 816-633-5524. Interment will follow in the Odessa Cemetery. Memorials are suggested to the First Baptist Church Building Fund. Memories of Davijean and condolences for her family may be left at www.LedfordFamilyFH.com or on our Facebook Page. She was born May 26, 1934, the daughter of David Elbert and Ethel Grace Rankin Filler, north of Odessa, Mo, on the family farm. Her mother died when Davijean was just 14 years old of cancer. Being the oldest one at home, after school, she took over cooking for the family of four, everything from homemade pies to making meatloaf. She was the greatest cook at such a young age. Davijean graduated from Odessa High School, class of 1952. She was employed at Sears in KCMO from 1952-1957. She married Mervin F. Barker on September 14, 1957, at the home of the Rev. Thomas Dyer and they had 52 years together before he preceded her in death on August 28, 2009. After their marriage, they headed for Puerto La Cruz, Venezuela where Mervin was employed with Williams Bros. Pipeline and they would live there for eight months. Then Davijean flew home and Mervin went on the Arica, Chile where he would work for five more months before returning to the states. They continued to travel in Canada and all over the United States, Mervin pulling the trailer and Davijean following behind in the car. When their son was ready for high school, they built a home in Emporia, Kansas in 1972 and they would stay until 1983. Mervin continue to travel with his job but was home every weekend. Davijean went to work at Interstate Brands from 1972-1974 and Emporia High School from 1974-1983. In 1983, as their son had moved to Phoenix, Arizona and Mervin was working out of the Kansas City office, they built a home in Odessa, Mo. One year later Mervin retired as superintendent of field construction after 25 years. Survivors include; a son, Douglas D. Barker, St. Louis, Mo., brother in law Gerald Coupland, two grandchildren Hailey and Dillon Barker and several nieces and nephews. Davijean was preceded in death by her husband, her parents and two sisters, Betty Coupland and Dixie Scott; a brother Robert Filler; and a brother-in-law, Leonard Scott, all of Odessa. Pallbearer’s include; Douglas Barker, Dillon Barker, Brendan Madsen, Brady Madsen, Brandon Filler, and Brian Madsen.

The family of Davijean "Puddin" (Filler) Barker created this Life Tributes page to make it easy to share your memories.