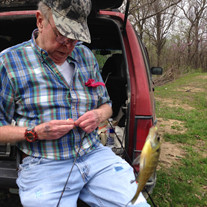 Mr. David Malcolm Elsea of Odessa, MO passed away at his home in the presence of his wife on Tuesday, January 28, 2020 at the age of 74. David was born on June 9, 1945 at the Warrington General Hospital in Warrington, England to T/Sgt. John Mortimer Elsea and Barbara Elsea (nee Wightman). David’s parents had met while his father, a USAAF pilot, was stationed in Preston Brook during WWII. David, and his older brother Jon Matthew Elsea, were brought over to the United States by their mother shortly after the end of the war. The family grew up in Lexington, MO where David attended and graduated from Lexington High school in 1963. Following his graduation, David attended court reporting school at Midwest Stenotype in Kansas City before enlisting in the Navy. He served approximately two years of active duty and four years in the reserves while in the Navy; for the duration of his service David was a JAG court reporter. In 1968, David married Gilly Ann Elsea (nee Kenney) after dating for four years in the Lexington, MO area; they were married at the Grace Lutheran Church in Lexington, MO. David and Gilly spent their early married years in Pearl Harbor, HI where David was stationed during his time in the Navy before being honorably discharged and moving to Independence and Lee’s Summit. David spent much of his career working at the Division 7 of the Jackson County Courthouse in downtown Kansas City, MO. David often spoke highly and fondly of the people he worked with under Judge William Mauer and seemed to be friends with everyone in the building. In his free time, David would often be found hunting and fishing with lifelong friends he had made over the years traveling to such places as Canada, the Gulf, Mexico, and all over the United States in pursuit of the next wall mounter. During this time David and Gilly aided in the raising of their nephew Douglas Kenney after the passing of his mother. In 1987, due to tragic circumstances, David and Gilly took in their nephew Matthew Kenney who they subsequently raised and adopted later in life. In 1989, they bought a 10 acre plot of land outside of Odessa, MO, which David stated was the best piece of property on the whole street. David would often be found in the garden every summer growing numerous tomato plants as well as sitting out on the deck at night reading the day’s paper and sipping a black Russian. David was an amazingly caring man and father and best known for his joking and friendly personality; he was a stranger to no one he met. He was also the best father a son could hope for. David is survived by his wife of 52 years, Gilly A Elsea; his son, Matthew D Kenney; brother, Jon M Elsea(Mary Elsea); niece, Taylor Pacheco(Nate Pacheco) and their two children, Jett and Raleigh; nephew, Douglas Kenney(Cyndi Kenney) and their three children, Dustin, Dalton, and Mila; aunt, Lela Mae Elsea; and other family in the Lexington area as well as England and Australia. The cremation occurred on Thursday, January 30, 2020. There will be a private spreading of the ashes at the Blackburn Cemetery at a date to be determined followed by a celebration of life gathering. The family asks that everyone who knew and loved David to remember him fondly and sip a black Russian in his honor.

Mr. David Malcolm Elsea of Odessa, MO passed away at his home in the presence of his wife on Tuesday, January 28, 2020 at the age of 74. David was born on June 9, 1945 at the Warrington General Hospital in Warrington, England to T/Sgt. John... View Obituary & Service Information

The family of David Malcolm Elsea created this Life Tributes page to make it easy to share your memories.

Mr. David Malcolm Elsea of Odessa, MO passed away at his home...

Send flowers to the Elsea family.