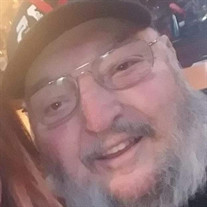 Darrel Dean “Spot” Vorwork, 68, of Odessa, Missouri, passed away on Friday, December 18, 2020 at Centerpoint Medical Center. A private graveside service with military honors will be held on Wednesday, December 23, 2020 at the Missouri State Veterans Cemetery. A celebration of life will follow at a later date. In lieu of flowers, memorials are suggested to the VFW 5675. Arrangements have been entrusted to Ralph O. Jones Funeral Home, 306 S. 2nd Street, Odessa, MO, 64076, 816-633-5524. Memories of Spot and condolences for his family may be left at www.LedfordFamilyFH.com or on our Facebook Page. Spot was born on December 17, 1952 in Independence, MO to Charles and Helen (Legate) Vorwork. He graduated from Odessa High School in Odessa, MO. Spot was a veteran of the United States Navy and earned the National Defense Service Medal and the Vietnam Service Medal. On June 20, 1992, he was united in marriage to Vicki Elizabeth Dear in Odessa, MO. Spot retired from Norfolk Southern Railroad after 30+ years of service as a foreman for the maintenance of way. He was a life member of VFW 5675, serving as past Post Commander and as Quarter Master/Adjunct for over 20 years. Spot was also a member of the American Legion and a life member of the NRA. In addition to spending time with family and friends, Spot enjoyed shooting guns and woodworking. Survivors include Spot’s wife, Vicki (Dear) Vorwork of Odessa, MO; his brother, Pete Vorwork and wife Vicky of Odessa, MO; two sons, Jamie Limback and companion Shalimar Loveall of Odessa, MO, and Joshua Limback of Odessa, MO; one daughter, Trina Fulks of Independence, MO; and three grandchildren, Cody Fulks, Dylan Fulks, and Bryce Limback. In addition to his parents, Spot was preceded in death by a son, Jason Limback.

Darrel Dean &#8220;Spot&#8221; Vorwork, 68, of Odessa, Missouri, passed away on Friday, December 18, 2020 at Centerpoint Medical Center. A private graveside service with military honors will be held on Wednesday, December 23, 2020 at the Missouri... View Obituary & Service Information

The family of Darrel "Spot" Dean Vorwork created this Life Tributes page to make it easy to share your memories.

Send flowers to the Vorwork family.