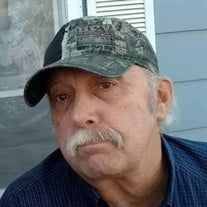 Craig A. Corn, 66, of Odessa, Missouri passed away on Friday, July 5, 2019 at his home. The family will host a visitation from 5:00 p.m. to 6:00 p.m. at the Odessa Restoration Branch, 6783 Hwy 131, Odessa, MO, with a Celebration of Life beginning at 6:00 p.m. on Friday July 12, 2019. The family has entrusted cremation to the Ralph O. Jones Funeral Home, 306 S. 2nd St, Odessa, MO, 64076, 816-633-5524. Memories of Craig and condolences for the family may be left at www.LedfordFamilyFH.com or on our Facebook Page. Craig was born on September 22, 1952 in Lexington, Missouri to Paul and Ruth (Dahl) Corn. He graduated from Odessa High School in 1973. He worked for Advanced Industries and M&M Golf Carts. In addition to spending time with friends and family, Craig enjoyed being a mechanic, tinkering, but most of all, spending time with his grandchildren. Survivors include two daughters both of Independence, MO Crystal Corn and Roxann Dell and husband Andrew; two grandchildren, Hailey Corn and Clayton Dell; two brothers, both of Odessa, MO Mike Corn and Rick Corn and wife Pam; four sisters, Nancy corn of Odessa, MO Diane Barker of Odessa, Deborah Kaat and husband Ralph of Raytown, and Lisa Volskay and husband Randy of Holden, MO. In addition to his parents, Craig was preceded in death by four brothers, Bill, Dennis, Randy, and John.

The family of Craig A. Corn created this Life Tributes page to make it easy to share your memories.

Send flowers to the Corn family.