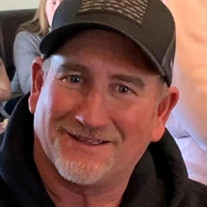 Clifford Clemens, 58, of Odessa, Missouri passed away on Thursday, September 9, 2021, at St. Luke’s East Hospital in Lee’s Summit, MO. A visitation will be held from 12:00 p.m. to 2:00 p.m., Sunday, September 19, 2021, at Berry Acres, 6825 MO-131, Odessa, MO 64076. Funeral service will be begin at 2:00 p.m. at Berry Acres. Interment will follow at Greenton Cemetery in Odessa, MO. Following services family will gather at Berry Acres for food and fellowship. Memorials are suggested to the family in care of Brett or Bryant Clemens, for a charity to be chosen at a later date. Memorials may be left in care of Ralph O. Jones Funeral Home, 306 S. 2nd Street, Odessa, MO, 64076, 816-633-5524. Memories of Clifford and condolences for his family may be left at www.LedfordFamilyFH.com or on our Facebook Page. Clifford was born on July 6, 1963, to Curtis and Ruby “Judy” Jewel (Eberts) Clemens in Lexington, MO. He graduated from Odessa High School in 1981. On June 23, 1984, Clifford was united in marriage to Cynthia Tebbe. They later divorced however remained good friends. Clifford owned and operated C.N. Clemens Excavation since 1989 and was a partner in Triple C Underground both located in Odessa, MO. He was a member of Odessa Restoration Branch and the Blue Springs Elks Lodge. In addition to spending time with his grandchildren, Clifford enjoyed fishing and hunting. Clifford is survived by his father, Curtis; two sons, Bryant Clemens and Brett Clemens and companion Tiffany Rider; three grandchildren, Emma, Allie, and Kane Clemens; a brother, Brad Clemens (Rachelle); and two sisters, Elaine “Dodie” Busby, and Debbie Allen, all of Odessa; and many relatives and friends. Clifford was preceded in death by his mother, and a son, Brandon Clemens.

The family of Clifford Clemens created this Life Tributes page to make it easy to share your memories.

Clifford Clemens, 58, of Odessa, Missouri passed away on Thursday,...

Send flowers to the Clemens family.