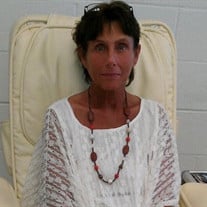 Caroline Beatrice Nevels, 69, of Lexington passed away August 29, 2021 at her home. There will be a private family inurnment at Lexington Memory Gardens Cemetery. Memories and condolences may be left at www.LedfordFamilyFH.com. Arrangements... View Obituary & Service Information

The family of Caroline Beatrice Nevels created this Life Tributes page to make it easy to share your memories.

Send flowers to the Nevels family.