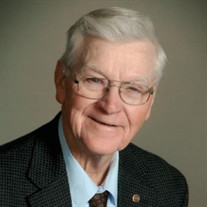 Carl Herman Soendker, 85, of Lexington, MO passed away on Tuesday, July 9, 2019 at the Just Like Home facility in Kansas City, MO. Visitation will be held at the Grace Lutheran Church, 806 S. Business Hwy 13, Lexington, MO 64067, on Friday, July 12, 2019 from 6:00 p.m. to 8:00 p.m. Funeral services will begin at 1:00 p.m. Saturday, July 13, 2019 at the church. Burial with Military Rites will be in the Lexington Memory Gardens in Lexington, MO. Memorials are suggested to the Grace Lutheran Church. Memories of Carl and condolences for his family may be left on our website at www.LedfordFamilyFH.com or on our Facebook Page. Arrangements have been entrusted to Walker-Nadler-Fuller Funeral Home, 1720 South Street, Lexington, MO 660-259-2245. Carl was born in Wellington, MO on July 14, 1933 to Wesley and Mary (Baker) Soendker. Shortly after graduating high school, he enlisted in the United States Army on July 22, 1953 and served until being honorably discharged on May 19, 1955. Later that year on October 1, 1955 Carl was united in marriage to Wanda (Klussman) Soendker in Corder, MO. Carl was co-owner and manager of Lafayette Auto Center from 1973 to 1996. Carl was co-chairman of the Lafayette County Veteran’s Memorial Committee which led the project in building the Veteran Memorial, located in downtown Lexington. He was a member of the Grace Lutheran Church, V.F.W. Post 4052, Mid-MO Tractor Club and the American Legion Post 60. Carl was a past Post Commander of the American Legion and also served on many positions at Grace Lutheran Church including Board of Elders and past Treasurer. Carl is survived by two sons, James and Gloria Soendker of Kansas City, MO, and David Lee Soendker of Lexington, MO; and one daughter, Carol Diane Soendker of Raymore, MO; Three grandchildren, Austin Soendker, Breanna Soendker and Sarah Miller; two great-grandchildren, Miles and Violet Miller; four brothers, Calvin Soendker and wife Jeannie of Higginsville, MO, Robert Soendker and companion Pat of Mayview, MO, Larry Soendker and wife Linda of Mayview, MO and Dennis Soendker and wife Monica of Lexington, MO; and two sisters, Janice Kay Jenkins and husband Richard of Lee’s Summit, MO and Esther Dieckmann and husband Kenneth of Napoleon, MO; and many nieces and nephews. In addition to his parents, Carl was preceded in death by his wife; three brothers, Wesley Jr., Lawrence and Delbert Soendker; two sisters, Wahneta Bell and Helen Diestelkamp. The family would like to thank the wonderful team at KC Hospice and Pallative Care and the amazing staff at “Just Like Home” in Kansas City, MO (Patty Nelson, Claudia Larkin and Michelle Gibson) for “The loving care they provided to our father.”

The family of Carl Herman Soendker created this Life Tributes page to make it easy to share your memories.

Carl Herman Soendker, 85, of Lexington, MO passed away on Tuesday,...

Send flowers to the Soendker family.