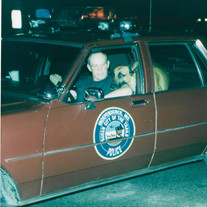 Carl Dean Harber, 79, of Odessa, Missouri passed away on Monday, March 7, 2022, at his home surrounded by family. A visitation will be held from 5:00 p.m. to 7:00 p.m. on Monday, March 14, 2022, at Ralph O. Jones Funeral Home, 306 S. 2nd Street, Odessa, MO, 64076, 816-633-5524. A memorial service will begin at 7:00 p.m., on Monday, March 14, 2022, at the funeral home. Memorials are suggested to Sarah Cannon Cancer Center. Memories of Carl and condolences for his family may be left at www.LedfordFamilyFH.com or on our Facebook page. Carl was born on October 4, 1942, to Melvin Carl Harber and Cecil Nadine (Connor) Harber in Cole Camp, MO. After graduating from Fort Osage High School in 1960, he attended William Jewell College for one year before enlisting in the United States Air Force on May 24, 1962. Carl then earned his Criminal Justice Degree from Central Missouri State University. On September 3, 1966, Carl was united in marriage to Glenda Kay Whitson in Independence, MO and celebrated 55 years. He worked for the Independence Police Department starting as a Patrolman, moving through the ranks as a Detective and Swat-Team, finally retiring as the K-9 Officer with his dog Arco. After Retiring, Carl continued to volunteer and be on-call for Jackson County Search and Rescue and consulting for Sugar Creek Police Department. Carl was instrumental in helping fund and develop the K-9 Patrol Unit with the Independence Police Department and his two K-9 Officers, Arco and Larry. Carl was a member of the Independence F.O.P Lodge #1, 4-H Leader, Past-President of the Oak Grove Saddle Club, and the Mt. Hope Masonic Lodge #476. In addition to spending time with family and friends, Carl loved his sports cars, and was an avid sports fan enjoying baseball, football, golf, and bowling. He also enjoyed hunting and fishing. Carl is survived by his wife, Glenda Kay Harber of Odessa, MO; two daughters, Lisa Elaine Crockett of Odessa, MO and Mindy Lynn Felden and husband Myke of Oak Grove, MO; four grandchildren, Jessika Elkins of Holden, MO, Jamieson Crockett of Odessa, MO, Jacob Felden of Blue Springs, MO, Josie Felden of Oak Grove, MO; one great-granddaughter, Bonnie Mae Elkins of Holden, MO; and one sister, Sondra Mae Herschberger of Bonita Springs, Florida. Carl was preceded in death by his parents.

The family of Carl Dean Harber created this Life Tributes page to make it easy to share your memories.

Carl Dean Harber, 79, of Odessa, Missouri passed away on Monday,...

Send flowers to the Harber family.