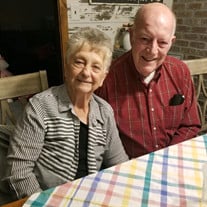 Carl H. Buck, 83, of Odessa, Missouri, passed away on Monday, August 2, 2021, at St. Luke’s East Hospital in Lee’s Summit, MO. Carl was born on April 30, 1938, in Kansas City, MO to Buford P. Buck and Irene M. Buck (Alcox). He grew up in Kansas City and joined the Boy Scouts, attaining the rank of Eagle Scout. After Carl graduated from East High School in KC, MO, he joined the United States Army on June 16, 1957, serving until honorably discharged on December 15, 1957. Carl met his beautiful wife, Ellen (Richardson), while working at BMA insurance. She survives of the home. They were united in marriage on September 6, 1959. Carl joined the Kansas City MO police department for 5 years before taking a position at GM Leeds Plant in Kansas City, MO as a security guard, which he fulfilled for 28 plus years. He was one of the last employees at the plant when they shut the doors. Carl and Ellen bought a home and 40 acres in Odessa in 1969 where they raised their family and enjoyed country life. Carl never met a stranger and had a heart of gold to help those in need—now mind you, he did have his definite opinions and wasn’t shy about letting you know. Carl enjoyed working on projects, lawnmowers, small engines, and loved spending time with family. In addition to his wife, Ellen, Carl is survived by two daughters, Karla Polson (Ross) of Odessa, MO and Deborah Dresch (Tracy) of Independence; four grandchildren, Riley Polson (Amannda) of Blue Springs, Raegan Clemens (Nick) of Odessa, Lauren Dresch of Springfield, MO, and Brittany Waughtal of Harrodsburg, Kentucky; five great grandchildren; Ellen’s sister and brother in law, Mary and Jim Daniels of Versailles, MO; a sister in law, Helen Buck of Holden, MO; and many nieces, nephews, friends and great neighbors. Carl was preceded in death by his parents; a sister, Ruth Buck Cook; and a brother, John Buck. A visitation will be held for Ellen and Carl from 11:30 a.m. to 12:30 p.m. on Friday, October 1, 2021, at First United Methodist Church of Odessa, 301 S 1st St, Odessa, MO, 64076. A Celebration of Life will begin at 12:30 p.m. at the church. An inurnment with Military Honors will be held at 2:00 p.m. at the Higginsville Veteran’s Cemetery 20109 Business Hwy 13, Higginsville, MO, 64037. Memorials are suggested to Odessa Senior Center Building Board or First United Methodist Church of Odessa. Arrangements have been entrusted to Ralph O. Jones Funeral Home, 306 S. 2nd Street, Odessa, MO, 64076, 816-633-5524. Memories of Ellen and Carl and condolences for her family may be left at www.LedfordFamilyFH.com or on our Facebook Page.

The family of Carl H Buck created this Life Tributes page to make it easy to share your memories.

Send flowers to the Buck family.