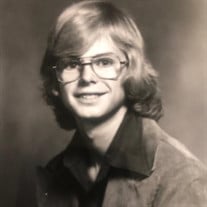 Bradley Linn Wilson, 58 of Odessa, Missouri passed away on Thursday, August 22, 2019 at Research Medical Center in Kansas City, MO. A Celebration of Life will be held at 6:00 p.m., Wednesday, August 28, 2019 at the Ralph O. Jones Funeral Home, 306 S. 2nd St., Odessa, MO, 64076, 816-633-5524. Memorials are suggested to the family in care of Patricia Polson. Memories of Bradley and condolences for his family may be left at www.LedfordFamilyFH.com or on our Facebook Page. Brad was born on October 16, 1960 in Holden, MO to Norris and Patricia (Bellington) Wilson. He graduated from Odessa High School in 1979. On August 24, 1988 he was united in marriage to Carol Lynn (Miller) Wilson. In addition to spending time with family and friends, Brad was known for being a great artist, musician, woodworker and being funny. Brad had played with several different bands in the past 35 years. Survivors include his mother, Patricia Polson of Odessa; wife, Carol Wilson of Odessa, MO; three children, Adam Henke of Blue Springs, MO, Branden Wilson of Oak Grove, MO and Andrea Wilson of Grain Valley, MO; a granddaughter, McKenna Marshall; one brother, Randy Wilson and wife Becky of Gladstone, MO; and many nieces, nephews and cousins. Brad was preceded in death by his father, Norris Wilson and stepfather, Ronald Polson.

The family of Bradley Linn Wilson created this Life Tributes page to make it easy to share your memories.

Bradley Linn Wilson, 58 of Odessa, Missouri passed away on Thursday,...

Send flowers to the Wilson family.