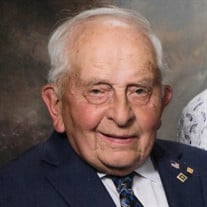 A visitation will be held from 6:00 to 8:00 on Tuesday June 30, 2020 at Ralph O. Jones Funeral Home, 306 S. 2nd Street, Odessa, MO 64076, 816-633-5524. Funeral service will be held at 10:00 on Wednesday, July 1, 2020 at the funeral home. Burial will be in the Ebenezer Cemetery in Levasy, MO. Memorials are suggested to the Ebenezer Cemetery Fund or Lumicare Hospice. Memories of Arnold and condolences for his family may be left on our website www.LedfordFamilyFH.com or on our Facebook Page.

Arnold was born on July 11, 1936 to Arnold and Olinda Lydia (Knoche) Siefker in Levasy, MO. After graduating from Ft. Osage High School in 1954, he later enlisted in the United States Army and served until honorably discharged in 1965. On November 28, 1963 Arnold was united in marriage to Louise Dieckmann in Levasy, MO. He worked for GMAC as an accounting manager for 38 years, retiring in 1993. While working at GMAC he also farmed, after retirement he became a dedicated farmer. He also sold straw to various businesses throughout the years, most notably the American Royal. Arnold was a member of the Ebenezer United Church of Christ in Levasy, MO. In addition to spending time with family and friends, Arnold enjoyed being a 4-H woodworking leader.

Arnold was preceded in death by his parents.


To order memorial trees or send flowers to the family in memory of Arnold Otto Siefker, please visit our flower store.