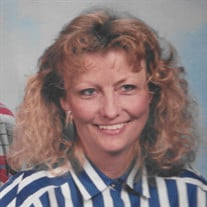 Annette Lynn (Grimsley) Dailey, 62, of Mayview, Missouri passed away on Tuesday, March 22, 2022, at St. Mary’s Medical Center in Blue Springs, MO. A visitation will be held from 12:00 p.m. to 1:00 p.m., on Friday, March 25, 2022, at First United Methodist Church of Odessa, 301 South First Street, Odessa, MO, 64076. A funeral service will begin at 1:00 p.m. Burial will follow at Odessa Cemetery. In lieu of flowers, memorials are suggested to Baby Grace or First United Methodist Church of Odessa and may be left in care of Ralph O. Jones Funeral Home, 306 S. 2nd Street, Odessa, MO, 64076, 816-633-5524. Memories of Annette and condolences for her family may be left at www.LedfordFamilyFH.com or on our Facebook Page. Annette was born on July 20, 1959, to Stanley and Beverly (Bezemer) Grimsley in Butler, MO. After graduating from Adrian High School, she earned her master’s degree in teaching from Central Missouri State University in Warrensburg, MO. On July 25, 1981, Annette was united in marriage to Jay Dailey in Adrian, MO. She taught high school English, Speech, and coached Debate at Blue Springs School District for 20 years. Annette was a member of Alpha Gamma Delta at University of Central Missouri and Beta Sigma Psi Alpha Epsilon Alpha Chapter. She attended United Methodist Church of Odessa. In addition to spending time with family, friends, and those she adopted as her own, she was avidly involved in bible study, an active member within the church, and enjoyed shopping. Survivors include her husband, Jay Dailey, of 40 years; her mother, Beverly Grimsley of Adrian, MO; a daughter, Mandi Talley (Joe) of Mayview, MO; a brother, Tim Grimsley of Olathe, KS; two sister-in-laws, Dot (Danny) Hughes and Kay (Darrell) Jones; a brother-in-law, Bob Dailey; many nieces and nephews; her much loved grand-dog, Lucy; and many friends. Annette was preceded in death by her father, Stanley Grimsley; a sister-in-law, Sharon Grimsley; two nieces, Courtney Yount and Tara Jones; and a grand-dog, Sadie.

The family of Annette Lynn Dailey created this Life Tributes page to make it easy to share your memories.

Send flowers to the Dailey family.