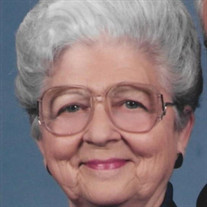 On February 5, 2022, Anna Margaret (Brannock) Gray, at the age of 97, passed away peacefully at Season’s Care in Kansas City, MO. A private family service will take place, followed by a private Graveside Service at Greenton Cemetery in Odessa, MO. In lieu of flowers, memorials are suggested to Greenton Cemetery or Alzheimer’s Research. Memories of Annie and condolences for her family may be left at www.LedfordFamilyFH.com or on our Facebook page. Arrangements have been entrusted to Ralph O. Jones Funeral Home, 306 S. 2nd Street, Odessa, MO, 64076, 816-633-5524. She was born in Columbus, MO on September 13, 1924, the youngest daughter of Clarence and Margaret Brannock. Anna, also known as “Annie”, lived a long and joyful life with her husband, James Arthur Gray. They were united in marriage on December 19, 1943. They had two children, a daughter and a son. After graduating from Odessa High School in 1941 she worked at several establishments in her life, including, Mattingly’s Store, Hipsh Tie Factory, Town and Country Shoe Factory, Aladdin, Don’s Appliances, Herfords, Woolworth’s, and Lake City. She was a devout member of the Bates City Baptist Church. In her spare time, she enjoyed sewing, various craftwork, playing cards, and other games with her family and friends, and never missing her “story” on daytime television. She also enjoyed many camping trips with her husband, traveling to Branson numerous times, and to Bluegrass Festivals. She and her husband spent many winters in Donna, Texas. Annie was preceded in death by her husband of 71 years, her parents, three sisters, Leota Gilham, Louise Beard, and Ella Pearl Buchanon. Annie is survived by her daughter and son-in-law, Emma Lou and Gene Ray Specker, and her son and daughter-in-law, Thomas and Beverly Gray. Her six grandchildren: Dean Specker (partner, JoAnn Ellsworth), Darrick (Wednesday) Gray, Dawna (Eric) Johnson, Danielle (Sam) Hudson, Danette (Roger) Dyer, and Regan (Krista) Henry Annie is also survived by thirteen great grandchildren and four great great grandchildren. Her wisdom will live on in all of them. “Don’t do something I wouldn’t do.” – Anna Margaret Gray.

On February 5, 2022, Anna Margaret (Brannock) Gray, at the age of 97, passed away peacefully at Season&#8217;s Care in Kansas City, MO. A private family service will take place, followed by a private Graveside Service at Greenton Cemetery in... View Obituary & Service Information

The family of Anna Margaret Gray created this Life Tributes page to make it easy to share your memories.

Send flowers to the Gray family.