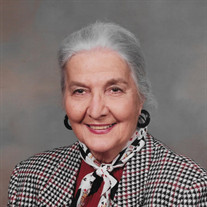 Anita Margaret Glisson, 96, of Lexington, Missouri passed away peacefully in her sleep on January 14, 2022 at Shirkey Nursing and Rehabilitation Center in Richmond, Missouri where she was recovering from a broken hip. A Mass of Christian Burial will be held Monday, January 24, 2022 at 9:30 a.m. at Immaculate Conception Catholic Church, Lexington, Missouri. The Rosary will be prayed prior to Mass at 9:00 a.m. Visitation will be Sunday, January 23, 2022 at Walker-Nadler-Fuller Funeral Home, Lexington from 2:00 p.m. until 4:00 p.m. Burial will be in Memorial Park Cemetery, Lexington, Missouri. Memorials may be made to the Immaculate Conception Altar Society or the Friends of the Friendless animal rescue shelter, both of Lexington. Memories and condolences may be left at www.LedfordFamilyFH.com. Arrangements have been entrusted to Walker-Nadler-Fuller Funeral Home, 1720 South Street, Lexington, MO 64067, 660-259-2245. Anita was born February 24, 1925 in Lexington to Mikey and Anna (McIntyre) Mike. She graduated from Immaculate Conception Catholic School in 1938 and from Lexington High School in 1942. She later attended Central Missouri State College. During WWII, she worked for the Federal Civil Service in Topeka, Kansas, Chicago, Illinois and San Antonio, Texas. After the War, she worked as the Executive Assistant to the Commandant of Wentworth Military Academy, Lexington, where she met Cadet William (“Bill”) Charles Glisson. They married on December 29,1951 in Lexington. Anita moved with her husband Bill to various Army posts during his military career, always returning to Lexington during his many overseas assignments. Anita returned to Lexington again in 1972 where she lived for the remainder of her life. Anita retired from the State of Missouri, Department of Family Services where she was an eligibility caseworker. Outside of work, Anita was a longtime member of the Immaculate Conception Catholic Church and its Altar Society, the World Wildlife Fund, and many other animal rights organizations. Throughout her life, she generously supported numerous Catholic social service agencies and missions. Anita was a devoted mother and was always ready with a helping hand for elderly members of her extended family. She valued reading and volunteered to teach reading to children, and she was known for her compassion and steadfast independence. Anita loved animals and jokingly counted her Labrador Retriever, Brandy, as her second son. She was a loyal sports fan and closely followed her favorite teams, including Mizzou, the Chiefs and the Royals. Anita is remembered lovingly by her family as an avid card and board game competitor, a sharp-witted storyteller, and an enthusiastic traveler. She especially treasured her many journeys with cousin Lucille Kuefel and niece Robbin Cresswell. Her travels took her throughout the United States and to several foreign countries, such as Kenya, England and Mexico. Anita is survived by her son, Gary Glisson of Richmond, Missouri and his wife Julia of Lake Oswego, Oregon; grandchildren, Will Glisson of New York City, New York and Grace Glisson of Lake Oswego, Oregon; sisters, Michele Monet of San Antonio, Texas and Wanda Levy of Wichita, Kansas; niece, Robbin Cresswell of San Antonio, Texas; nephew, Steve Levy of Wichita, Kansas; and many cousins. She was preceded in death by her parents and husband, her brother, Harry Mike, and nephew, Paul Robert Levy.

Anita Margaret Glisson, 96, of Lexington, Missouri passed away peacefully in her sleep on January 14, 2022 at Shirkey Nursing and Rehabilitation Center in Richmond, Missouri where she was recovering from a broken hip. A Mass of Christian Burial... View Obituary & Service Information

The family of Anita Margaret Glisson created this Life Tributes page to make it easy to share your memories.

Send flowers to the Glisson family.