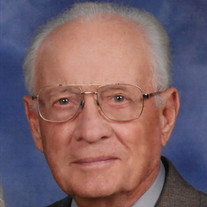 Alvin Herman Fahrmeier, 90, of Wellington passed away August 24, 2020 at Meyer Care Center, Higginsville. Visitation will be Saturday, August 29, 2020 from 9:30 until 10:30 am at St. Luke Evangelical Free Church, Wellington. A funeral service for relatives will be at 11:00 am on Saturday at the church. Masks and social distancing will be observed. Burial with Military Honors will be at St. Luke Cemetery. Memorials may be made to St. Luke Cemetery Fund. Memories and condolences may be left at www.LedfordFamilyFH.com. Arrangements have been entrusted to Walker-Nadler-Fuller Funeral Home, 1720 South Street, Lexington, MO 64067, 660-259-2245. Alvin was born January 11, 1930 in Wellington to Henry and Eugenia (Soendker) Fahrmeier. He graduated from Wellington High School. Alvin served in the United States Army during the Korean War. On August 26, 1956 he married Betty Louise Williamson in Bates City. She preceded him in death on September 19, 2016. Alvin was a lifelong farmer. He was a member of the American Legion, AARP, Farm Bureau and St. Luke Evangelical Free Church. Alvin is survived by his children, Lynn Fahrmeier and wife Donna of Wellington and Laura Beckemeyer and husband Jerry of Napoleon; grandchildren, Megan Beckemeyer, Christa Nebel and husband Michael, Samuel Fahrmeier and Elizabeth Fahrmeier. He was preceded in death by his parents, his wife, two brothers, Herbert Fahrmeier and Wilbert Fahrmeier and sister, Erna Schowengerdt.

The family of Alvin Herman Fahrmeier created this Life Tributes page to make it easy to share your memories.

Send flowers to the Fahrmeier family.