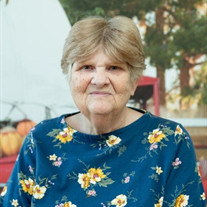 Aldonna (Sookie) (El) Lee Burnett, 71 passed away at her home in Lexington on Friday October 8, 2021. Her services will take place on Thursday October 14th with visitation at 4:30-6:30 pm and funeral to follow at Walker-Nadler-Fuller Funeral Home, Lexington. Cremation and interment will take place at a later time. All in attendance are asked to wear Chief's attire. The family would suggest you wear a mask. Memorials may be made to the Discovery Room Preschool. Memories and condolences may be left at www.LedfordFamilyFH.com. Arrangements have been entrusted to Walker-Nadler-Fuller Funeral Home, 1720 South Street, Lexington, MO 64067, 660-259-2245. She was born on August 23, 1950 in Kansas City to Leroy and Fletah (Stanton) Gooseman. They brought her home to their house in Wellington at the Coal Mine Camp home where they first lived. They later moved in to town on what is now highway 131. Aldonna and Robert (Bob) Burnett were married on December 28, 1998. She graduated from Wellington-Napoleon R-9 in 1968; Aldonna was involved in FHA, Pep Club and Choir. Her senior year she was in a Girls sextet that received a II rating at state. She had made many lifelong friends during her school days. She attended a trimester at Central Missouri College in Warrensburg. She started working at Rush's Drug Store in Lexington, where she was the best soda jerk around. She made even more friends and started her love of Minutemen Football. She met and became friends with Julie Bunch Reynolds and Janice Dunkle also their families included her as a member and she recieved another nickname "El". They enjoyed going and watching the Dunkle Boys play Minutemen football and loved the games at Wentworth Stadium. She has continued her love of the Minutemen and went to the game on October 1st, when they got their first win of the season, with Chris Brooks as coach, (one of her favorite players) at Gil Rector Stadium. She worked weekends and evenings at Country Time Pizza in Lexington and also worked at Old Town Tavern when Bob Bunch needed help and kept working Saturdays there until the Bunch family sold the tavern . She went to work for Dunbrooke Sportswear in Lexington, as a payroll clerk in the mid 1970's and went to Independence, when they moved the offices. She left there in 1999 and took a few months off then in October she started working at the License Bureau in Lexington, she remained there until 2010. She then retired and these last five years she has volunteered at the Discovery Room Preschool , known as "Nana Aldonna", she loved all of the children and the ladies she worked with. Aldonna had a huge heart and never met a stranger and loved to have a good time. She loved helping children. During the early to mid 1970's she was a Cub Scout Den Mother in Wellington for Pack 317. She helped Suzie Bunch Hoeflicker with her girls in 4H teaching photography. She spent many of sleepovers with the Hoeflicker Girls (Sarah & Lauren) and many of their friends. She also helped many years with the Lexington and Wellington Fairs, with Kiddie Parades, Home Economics and Best Pet Contest. Aldonna would spend many a Friday nights at home with her younger siblings and their friends for birthdays or just sleepovers. The Gooseman Home from early days on was the gathering place of many friends of Aldonna and her siblings. She had a huge love for the Kansas City Chiefs, her and Bob never missed a game during the season the last 23 + years, she loved planning the snacks and having the Pointers over or going to their house for the games. She also enjoyed making sugar cookies for the holidays, which were enjoyed by all. Aldonna is survived by her husband, Robert (Bob) Burnett , of the home, their special family Josh and Tonda Pointer, Emily and Josh Jr. of Lexington; her siblings, Cumi Helm, Wellington, Tahnami and Gerald Gittinger, Odessa and Ed and Chris Gooseman, Wellington; nephews, Matt Helm and Jill Meyer, North Kansas City, Tyler Helm, North Kansas City, Garrett Helm, Independence, Brett Gittinger and Isabel Lopez, Odessa and Dawson Gittinger, Odessa; aunt, Virginia Stanton Holman, San Antonio, Texas; many, many cousins on the Gooseman and Stanton sides, especially cousin, Trisha Dunivan Burger and cousin Vidki Gooseman Pana; the Bunch Girls and their families and many other cherished friends. She was also preceded in death by in laws, Ed and Lisa Burnett Chillicothe, Illinois, Linda and Brad Powers, Bradford Illinois; nephews, Ross, Alex and Brock Burnett and families, Chillicothe, Illinois. She was preceded in death by her parents, brother in law Steve Helm, and father and mother in law Roy and JoAnn Burnett.

Aldonna (Sookie) (El) Lee Burnett, 71 passed away at her home in Lexington on Friday October 8, 2021. Her services will take place on Thursday October 14th with visitation at 4:30-6:30 pm and funeral to follow at Walker-Nadler-Fuller Funeral... View Obituary & Service Information

The family of Aldonna Lee Burnett created this Life Tributes page to make it easy to share your memories.

Send flowers to the Burnett family.